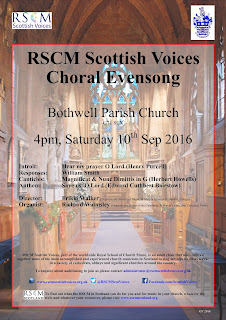 Yesterday we visited the wonderfully historic Bothwell Parish Church where we sang Choral Evensong directed by Frikki Walker and accompanied by Richard Walmsley.

The music included Bairstow's Save us, O Lord, Howells' Magnificat & Nunc Dimittis in G, William Smith Responses, and the introit Hear my prayer, O Lord which we were slightly naughty with after the rehearsal had finished.  Bothwell Parish Church has a mediaeval quire which has been closed for renovation for over four years but which was due to reopen a couple of weeks ago, that was partly why we arranged this date to go and sing there, but inevitably the works have been delayed by a short few weeks and although it's basically finished it hasn't yet been cleaned up, signed off as safe, and reopened so is still shuttered off from the main church.  But, and don't tell anyone this, access can be gained to it via an emergency exit door, so with copies in hand, and some trepidation lest the roof fell in on top of us, we briefly filed into the old part of the church and performed Purcell's hauntingly beautiful anthem with its soaring, climactic, eargasmic conclusion in the glorious acoustic of the mediaeval quire.  Just for fun.


A splendid day was had by all the choir, we had a fair number of people not only in the congregation during the service but wandering in and out during the afternoon's rehearsals since the church doors were open in connection with Bothwell's Scarecrow Festival, and the welcome we received from the minister, assistant minister, and everyone at the church was lovely.

The minister, Rev Jim Gibson who is Chaplain in Ordinary to Her Majesty the Queen as well as being a Member of the Chapel Royal in Scotland, led the service (along with Assistant Minister Rev Hanna Ranking), and started by welcoming everyone and giving a brief history lesson on the church in Bothwell which although now firmly a Presbyterian Church of Scotland was originally Roman Catholic and following the Reformation was Anglican for thirty years.  With members from many traditions we are very firmly a multi-denominational choir, the RSCM has something to offer all Christian denominations, and we were glad to be singing in a building that has hosted many flavours of Christianity over the years.

Our thoughts now turn to our next meeting, on Saturday 8th October when at 4pm we will sing Choral Evensong in St Cuthbert's Parish Church, Lothian Road, Edinburgh, for which the music list will be announced soon.

Posted by Layclerk at 12:22 No comments: Links to this post