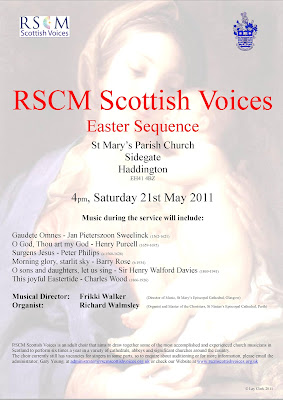 The next time you can hear RSCM Scottish Voices sing is at 4pm on Saturday 21st May 2011 in St Mary's Parish Church in Haddington when we shall be taking part in an Easter Sequence with music including:

Posted by Layclerk at 20:25 No comments: Links to this post

Gotcha! Or did we?

Yes, you're absolutely right, yesterday's post was an April Fool joke, we admit it.  Were you fooled?

It'd be a boring old world without laughter and RSCM Scottish Voices, while a serious (and seriously good) choir, is a group made up of people who are full of laughter and fun while making music, and that's how it should be.  Laughter is a wonderful thing, as the words from Genesis 21:6 suggest: ."....... God hath made me to laugh, so that all that hear will laugh with me."

That said, while clearly we meant no disrespect whatsoever, sincere apologies if anyone saw yesterday's post in anything other than the spirit in which it was meant.

So, we have no sponsorship deal with Tennents or anyone else, but it is true however that we'd be exceedingly pleased to talk about sensible options for such a deal if anyone with a bit of cash to spare or the clout within a company to help us out is reading this.  We won't put any logos on choir robes, no matter how good the offer, but other options are available for discussion!

Please contact us via the administrator's email address listed in the sidebar.
Posted by Layclerk at 00:01 No comments: Links to this post

RSCM Scottish Voices is still a relatively new choir, and as a self funded venture it's sometimes hard to rein back the wonderful plans for the future to match our disposable income.  Ideas include our own robes, tours of English Cathedrals, recordings, and lots of other stuff.

We haven't mentioned this previously in case it came to nothing, but over the past few months a lot of hard work and negotiation has been going on behind the scenes by Gordon and me to try to secure sponsorship to help us achieve some of these goals, and I’m pleased to say that only today, the start of April 2011, we’ve finalised a deal with a Glasgow based company who have an international reputation and who are happy to lay out their hard cash simply because we've convinced them that the reputation of RSCM Scottish Voices has become such that their sponsorship money will pay them dividends by getting their name and brand linked to our name and brand which their marketing department are now convinced will unlock a whole new marketplace for them, with the ultimate aim of their leading brand product replacing sweet sherry as the after-service refreshment of choice in refined churches across the land.

Inevitably when a commercial company is willing to provide annually a significant sum of tax free money to be spent by us on whatever we want, then we have to play ball with them to a certain extent, so while the sponsorship deal is in place, and it’s initially for a 3 year period, we will be known as RSCM Tennents Scottish Voices, and a new logo will be used to reflect the harmony between us and their world renowned product.

Below is the new logo, and under that is a mock up of how it is proposed that it will be displayed during the period of the sponsorship deal, when we have the robes which this money will allow us to purchase.

I think you'll agree it's striking, and I welcome any feedback or comments. 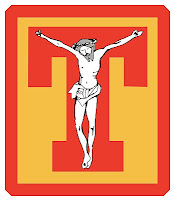 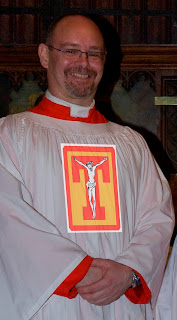 Posted by Layclerk at 00:01 No comments: Links to this post