It might be all about the bass, but the tenors get the drink 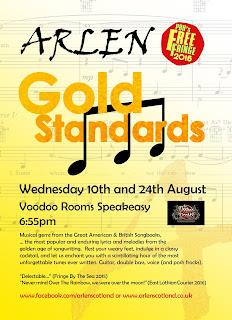 This site is to publicise RSCM Scottish Voices, and whilst that primarily takes the form of what the choir as a whole is doing it's safe to say that within our ranks are many extraordinarily talented musicians whose musical activities extend well beyond the church choral theme, and which deserve publicising.

One such of these is Sadie.  As well as singing alto in RSCM Scottish Voices Sadie entertains a different audience as a member of Arlen, and you can catch them performing musical gems from the Great American and British Songbooks in Edinburgh's Free Fringe at 6.55pm on 10th and 24th August in Voodoo Rooms Speakeasy, 19a West Register Street, Edinburgh EH2 2AA, and in the Fringe by the Sea at 3pm on 11th August in La Gaiete Spiegeltent in North Berwick. 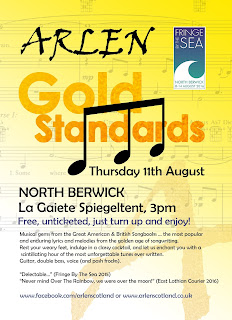 The performances are free, and we are reliably informed that not only will there be a stunning rendition of Meghan Trainor's All About That Bass, but any RSCM Scottish Voices tenors in attendance will be eligible to receive a free drink after the concert!


Posted by Layclerk at 19:20 No comments: Links to this post

The venues for our 2017 season have just been finalised, so including the last half of our 2016 season from this point forward our plans are listed below.  Other than our rehearsal weekend when there is no public access we'd be delighted to see you at one or more of our services, which generally start at 4pm, last under an hour, and contain glorious music!